Sample
Girl Code
Gaming, Going Viral, and Getting It Done

A New York Public Library Best Book of 2017Perfect for aspiring coders everywhere, Girl Code is the story of two teenage tech phenoms who met at Girls Who Code summer camp, teamed up to create a viral...

A New York Public Library Best Book of 2017Perfect for aspiring coders everywhere, Girl Code is the story of two teenage tech phenoms who met at Girls Who Code summer camp, teamed up to create a viral... 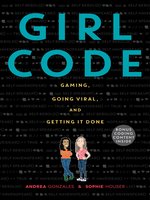 Girl Code
Gaming, Going Viral, and Getting It Done
Andrea Gonzales
Privacy Policy
Thank you for your recommendation

Girl Code
Gaming, Going Viral, and Getting It Done
Andrea Gonzales
A portion of your purchase goes to support your digital library.